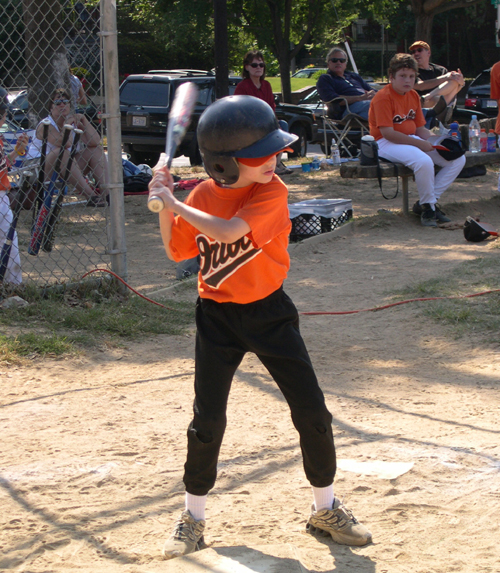 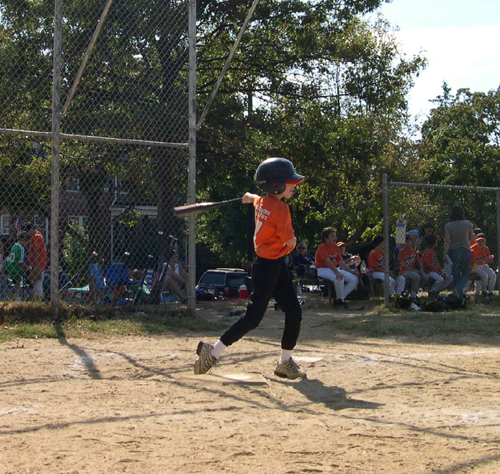 The AA Orioles closed out the 2005 Fall Season with a flourish, dominating the Red Sox, 27-5. The O’s had everything working against the Red Sox – offense, defense, base running, gum chewing – you name, they had it working. The Orioles’ victory, their fourth in row, improved their record for the season to 5 wins and 2 losses.

The victory was bittersweet, however, for it marked the end of an era for the Orioles. Saturday’s game was the last AA game for most of the Orioles, who will move up to AAA next season. After playing together for two years (and in some cases even longer), the Orioles will likely be scattered to different teams next year. Hopefully, they will remember their days as an Oriole fondly, and friendships that have been made will endure for many years to come.

But if you're going to end an era anyhow, why not party like it's 1999, eh? And the Orioles got the party started right off the bat. Eva opened the top of the first with a triple, and scored on Evan's ground out. David and Daniel singled, and Sophia doubled David home. Max's well-placed grounder then scored Daniel to give the O's a 3-0 lead. The Red Sox were blanked in the bottom of the first, with David (who else?) and Benji catching infield pop-ups.

The Orioles struck for two more runs in the bottom of second. Ari smoked a triple, tipped his hat to the crowd, and then scored on Jack G.'s double. Benji singled to advance Jack G. to third, and Jack P. drove him home with another single. A double play snuffed out the rally, however, and the Orioles had to be satisfied with a 5-0 lead. The Red Sox threatened to take a bite out of that lead in the bottom of the second with consecutive singles. But two force outs at third (one of them a nice unassisted play by Ari), and a grounder to Benji at pitcher retired the Sox with nary a run to show for their efforts.

No longer content to score runs in two's or three's, the Orioles batted around in the top of the third, adding eight more runs in the process. The Orioles' leadoff hitter par excellence Eva started the festivities with a single, and scampered to third on Evan's double. David then tidied up the bases with a three-run home run. Far from finished, the Orioles continued to pound the ball, loading the bases on singles by Daniel, Max and Sam. Harris scored Daniel with another single, and then, with the bases still stuffed, and the crowd murmuring expectantly, Jack Goldberg strode to the plate. Slowly, Jack eased himself into the batters box, digging in with his back foot, then holding the bat out for a moment, as if testing its weight. Tucking his chin behind his front shoulder, Jack hunched slightly, and turned his steely gaze to the pitching machine. The bat now back and ready, his grip tightening, Jack seemed to nod almost imperceptibly. He was ready. Behind the Orioles' bench, Jack's mom nervously rose from her seat, twisting a white handkerchief in her hands. The sunlight of Indian summer shimmered through her hair, framing her expression of excitement and concern. From then on, things seemed to move in slow motion. The pitching machine spat out a fastball with a slight puff of smoke. Coiled, but relaxed, Jack watched the ball hurtle towards the plate, the bright red stitching turning and turning and turning again. He waited patiently for the ball to reach the plate, and then, with a short, powerful turn of the shoulders, brought the bat around in a blur. The sharp crack of ball on bat startled the crowd. Jaws dropped, eyes widened, spectators and players rose as one to watch the ball rocket towards the outfield. Would an extended glove cut short its trajectory? Would a diving stop intercept its date with destiny? Jack was already half-way down the line when the ball hit the ground and shot towards the far reaches of the ballpark. As he rounded first, he saw only the backs of the Red Sox fielders, chasing a ball that still had no notion of stopping, or even slowing down. Rounding second, Jack knew he was going to go home, even before he looked up to see the wildly waving arms of Coach Rick. Coming home now, Jack knew the Sox outfielder had made a good throw. He could see the catcher's eyes tracking the majestic flight of the throw, positioning himself to make the tag. It would be a close play for sure. Immortality awaits the strong and the fleet. With a final burst of speed, Jack crossed the plate, just avoiding the tag. A grand slam! The Orioles, erupting in a spontaneous celebration, mobbed Jack as he made his way back to the bench. The Coach smiled to himself. It's going to be a good day, he thought.

With a 13-0 lead, the Orioles were perhaps a little distracted in the bottom of the third. The Red Sox managed four hits, but a nice play by Max at pitcher, and two catches by Ari at third limited the damage to two runs.

In the top of the fourth, the Orioles picked right up where the left off. Benji, Jack P. and Ian singled to lead the bases. Eva singled to score Benji, and Evan singled to score Jack P. Then David strode to the plate . . . and to cut a long story short, he noticed that the bases were completely filled with base runners. What else was there to do but tidy up a bit, with, oh I don't know, how about ANOTHER GRAND SLAM HOME RUN! Now leading 19-2, the Orioles retired the Red Sox in order in the bottom of the fourth.

But wait, the Orioles weren't finished yet. Harris opened the top of the fifth with a single, but was forced at second on a fielder's choice. Jack G. then followed with a single, and Jack P. chipped in a run scoring single of his own. Ian doubled home two more runs, Eva moved him to thrd with a single, and Evan and David added RBI singles. Then Daniel strode to the plate . . .and I think you get the idea by now -- smote a three run home run to make the score 27-2. The Red Sox rallied for three runs in the bottom of the fifth, but the final result was by then assured. The Orioles ended the game and the season with a nifty defensive play -- a diving stop by David and a quick flip to Jack P. at third for the force out.

The final stats will be distributed tonight. 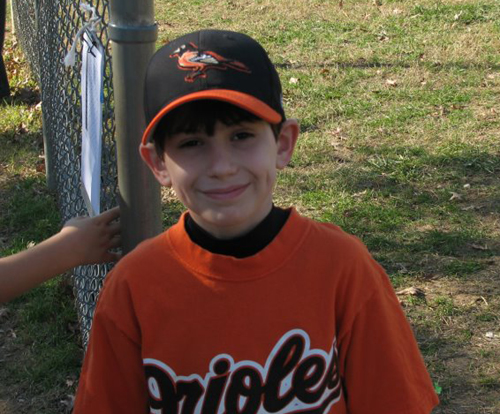 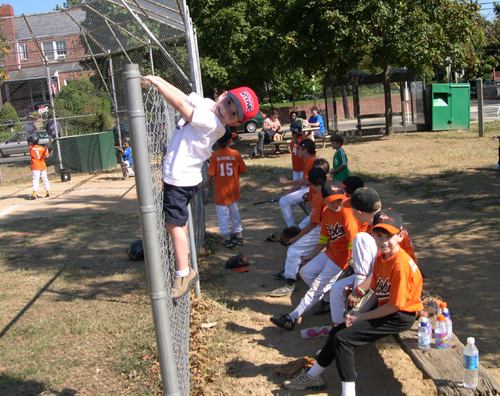 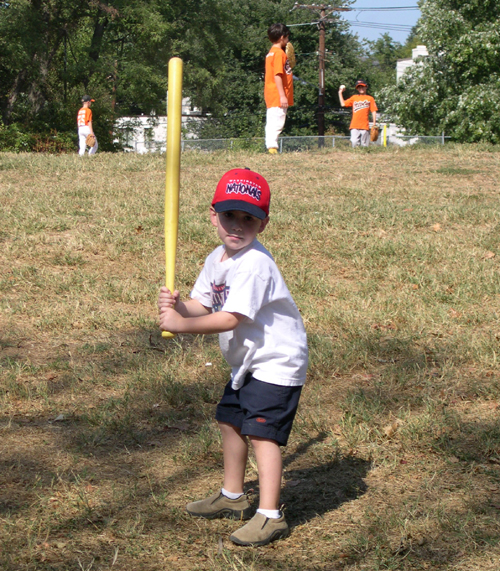 Joe is going to be a great ballplayer, too. 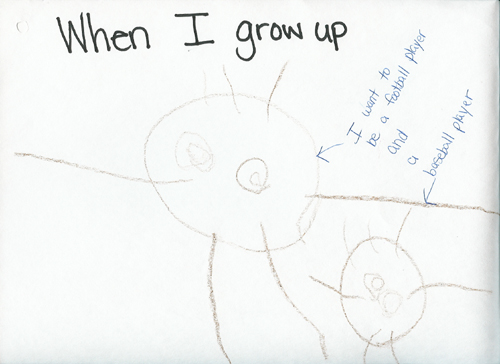 Posted by Allen Goldberg at Thursday, November 10, 2005 No comments: