Today this boy is getting a computer that my friend Hugh and I sent to him for his birthday. His birthday was yesterday. I hope he wasn't too bummed that he didn't get what he wanted on that day, but I know he'll be psyched today. 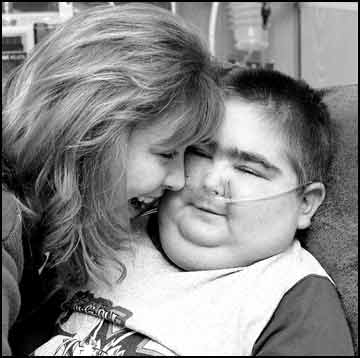 I read a story about him in his hometown newspaper. He lives in Montana, which is one state over from Minnesota. North Dakota is in between. He is in Seattle right now where he is recovering from his bone marrow transplant. He has Fanconi anemia just like you and Molly and Amitai. Barry has had it really rough.

Molly is in town right now with her family. They are doing tests but not because anything is wrong. They are trying to help people figure out how to fix Fanconi and other things that make people sick. Here is a picture of you, Mom, Molly and another girl who has Fanconi named Emily. 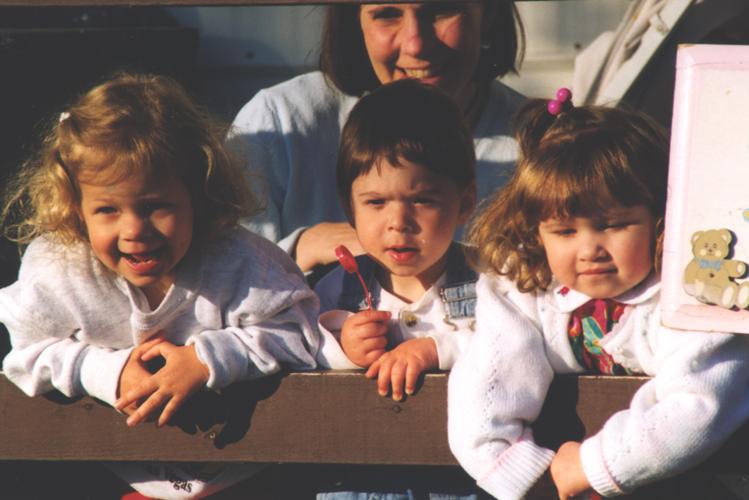 We have gone out to dinner with Molly and her brother Adam and her sister Delaney and her mom and dad twice this week. Jack has told Mom that it is hard for him to see them. He said that it makes him think of you.

He said something very sad and interesting because it is so grown up.

He said that he thinks that he is sadder than me and Mom about losing you. He explained that while Mom and I have each other, all he had was you. 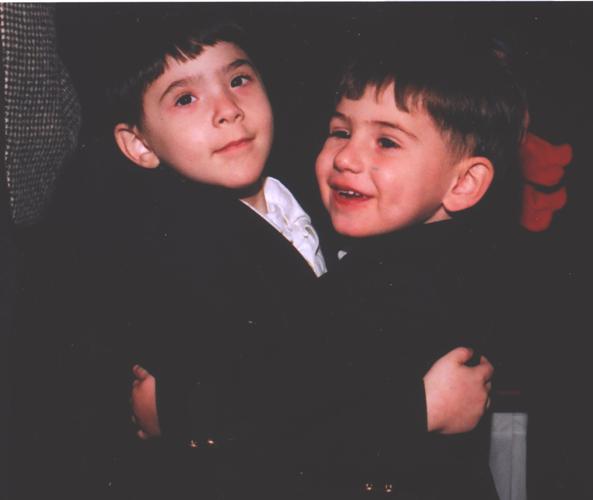 I understand what he is saying. 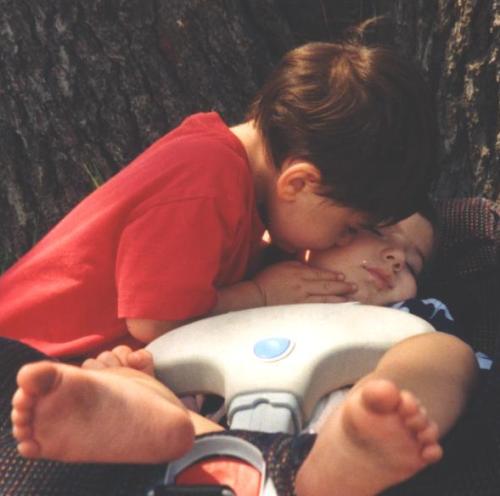 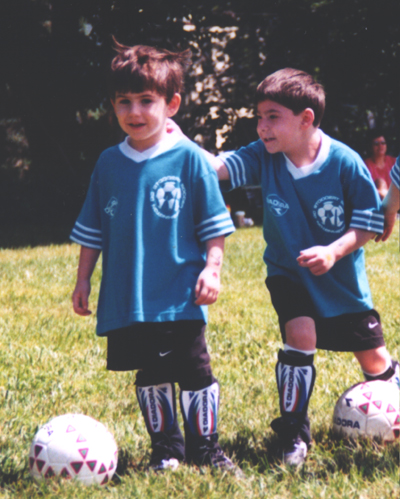 You were very sweet with him.

Two months ago, they weren't sure that would be the case.

“He was literally on death's door in January,” his mother, Cindy Wamsley, said earlier this week in a telephone interview from Seattle, where she and her son have been stuck since last summer.

“I was in a conference on a Friday, I can't remember the date, where they were going over quality-of-life issues and just what I was willing to let him go through,” she says.

Simon's two sisters were summoned from California to say goodbye to their little brother.

“I mean, he was unconscious, drugged up, tubes running everywhere, in diapers,” Wamsley says. But the sounds of his sisters' voices seemed to motivate him.

More than two months later, he and Wamsley left Children's Hospital on Tuesday for new digs at the Ronald McDonald House in Seattle.

Tuesday was only the eighth day this year Simon, who attended Paxson Elementary School, has not spent in the hospital.

He is not well, not by any means. Medications and steroids have contributed to a huge weight gain for the boy, who was a wiry kid of 60 pounds when he left Missoula last summer to undergo a bone marrow transplant.

His weight nearly doubled, to 112 pounds, after the transplant, and he's currently at 97 pounds.

The hospital stay - he came down with life-threatening infections in his lungs - and the weight gain have made it almost impossible for him to walk.

He has come down with hypertension and diabetes, and is on a strict diet.

“Sodium affects blood pressure, carbohydrates turn to sugar and sugar affects diabetes, so there are a lot of things he can't have,” Wamsley says.

A typical day might include unsweetened cereal and nonfat milk for breakfast, three fish sticks and a side salad with a tablespoon of dressing for lunch, and spaghetti made with a low-sodium sauce at dinner time.

“You start reading labels, everything has sodium in it,” Wamsley says. “There are not a lot of options to choose from. It's very bland, very plain.”

Wamsley has her mother on a mission to find a laptop computer for Barry for his 12th birthday, which is March 30. It's what he wants. Asked if people back home wanted to send him a present, she said he loves calling friends and his stepfather back in Missoula, and his sisters and other relatives in California. He has a cell phone from Net10 where the minutes are pre-purchased. Net10 cards are available at major retailers such as Target, Wal-Mart and Kmart.

The 20-foot-long hikes he takes - which he tries four or five times a day - may not seem like much, but it's a huge improvement from January.

On Jan. 29 he was only able to walk five feet, and it was extremely difficult. But it was Cindy Wamsley's birthday that day.

And that was Barry's gift to his mother.

If all goes well in a bone marrow transplant for a Fanconi anemia patient, they can go home 100 days after the procedure.

To say it's been tough for both Simon and his mother is both obvious, and an understatement.

Fanconi anemia is a genetic disease that only occurs when both parents carry the same defect in an FA gene, and leads to bone marrow failure. The odds of any one person having the defect are one in a million. The odds of both parents carrying it are astronomical. Even at that, there's a 75 percent chance any offspring will not be stricken with Fanconi anemia, and Simon was told he was case No. 992 in the world when he was diagnosed.

Wamsley and her two youngest children - daughter Brittany is living with relatives and attending high school in California while her brother undergoes treatments - moved to Missoula six years ago.

They stepped off a bus in a city where they knew no one, which is why they came here. Cindy, a methamphetamine addict, was desperate to kick her habit for fear she would lose her children if she didn't.

She figured the first step was to move somewhere where she wouldn't have a clue how to get ahold of any meth.

It worked. She's been clean since, she says, and was working as a clerk at a Missoula grocery store before her son fell ill.

She and her husband, Richard Wamsley, are separated, but Richard remains close to his stepchildren, has visited Barry in Seattle and they talk regularly on the phone.

Barry and Brittany's biological father lives in California and has had no contact with his children in years. When Barry learned he needed a bone marrow transplant, Cindy tracked her ex down to see if he would undergo tests to determine if he would be a compatible donor.

A match with an anonymous donor was later made. Without the transplant, which carries its own set of risks, most Fanconi anemia patients don't make it past their early teens.

Barry Simon became a bit of a celebrity in Seattle, thanks to people in western Montana.

KIRO-TV did a piece on the boy, mainly because word got out about the volume of mail he receives from back home.

After stories about him appear in the Missoulian, “The mail comes in tubs,” Wamsley says. “It's still the favorite part of his day.”

The walls are covered with the cards and letters, whether they're confined to the hospital, or in a nearby apartment where Barry must remain until his doctors give him the OK to come home.

“I've kept every card because I intended to answer every one,” Wamsley says. “But it won't ever be possible. I mean, I couldn't afford the postage. People in western Montana have just been incredible, and they have no idea what it's meant to Barry.

“It's been the best part of the journey,” she goes on. “People tell Barry how his story made them grateful, that they realized the problems in their lives are just speed bumps compared to what he's going through. He loves it that people tell him they're praying for him. It makes him feel so loved.”

Several people have become regular correspondents, writing Simon once or twice a week or more.

“They're not strangers anymore,” Wamsley says. “They're just friends we haven't met.”

A Seattle man who saw the segment on KIRO contacted Wamsley and said he wanted to help out with the birthday celebration.

He's organized a motorcycle ride on April 2, when several Seattle-area bikers will take off on a tour of the Puget Sound area. The original plan was for Barry to ride on the back of one of the bikes, although that appears unlikely now.

“If he can't get out of bed on his own, I don't see how he can ride on the back of a Harley,” his mother says. “But we're going, even if we have to ride along in a car.”

She promised her son long ago he would not spend his 12th birthday in the hospital.

“I know I shouldn't have, but I promised him he wouldn't spend it in here, even if it meant going against doctor's orders and me sneaking him out,” she says.

He talks about the old days, when he could run and play and ride his bike. He misses his friends. He misses his sister, his mother misses her daughter.

They fight on, one day at a time, with a very special day coming March 30.

“I mean, it might be his last birthday,” Cindy Wamsley says, crying softly. “There was no way I was letting him spend it in a hospital.”

Reporter Vince Devlin can be reached at 523-5260 or at vdevlin@missoulian.com


Hey Henry. Check this out. Remember Sara, the girl who used to sit with you in the hospital and clinic at Georgetown. I wrote you a long time ago to give you an update on her when she was still in school.

Well she is on TV now and they wrote about her in the newspaper today. 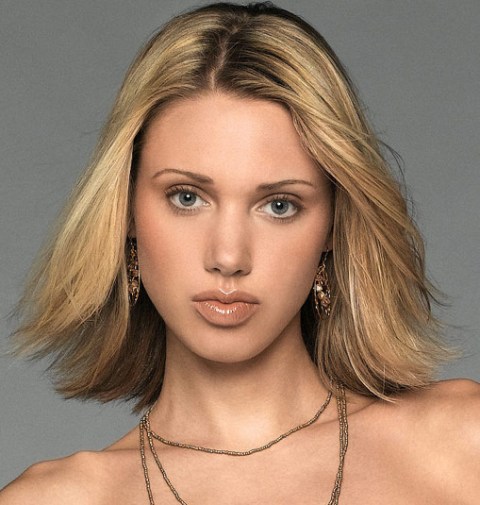 The Look of the 'Next Top Model'?

For more than two decades, David Bradley 's Advisory Board Co. has been the D.C. destination for Ivy Leaguers and other smart young things -- an intellectual boot camp that pushes its whiz kids to their limits while molding them for leadership in corporate America.

Yeah, but can it show 'em how to turn it out on the runway? A young Advisory Board researcher has emerged as an early favorite on high-camp reality show "America's Next Top Model." Sara Albert , 22, a recent Georgetown grad, was shopping at Pentagon City last summer when a casting agent spotted her willowy blondness. She made the cut as one of the 13 top contestants; on last week's premiere, she turned heads.

"This is fierce !," judge Jay Manuel exclaimed as Albert posed in a bald cap (then warned another model: "That [bad girl] turned it out, so you better represent "). Judge J. Alexander proclaimed her "my 6-foot-1 Scarlett Johansson !" though Hoya Web sites put the former volleyball star at 6-3.

Yet, Albert still has her day job. A bad sign? "I'm not allowed to do any sort of press until after the show," she said.

Here is her page from the TV show. I really hope she does well. Isn't that something!

Posted by Allen Goldberg at Thursday, March 16, 2006 No comments: