Well this reduced me to tears just now. I read this to Mom on the phone and couldn't finish it.

I cannot be happier for Aaron and his family, but reading this allowed me to think the "what if" you had made it thoughts that I don't think about much any more. The part that killed me was the "walking through the New Hampshire woods, seen whales..." part. I have written to you how I wanted to celebrate you "making it" by walking all or part of the Appalachian Trail with you. Then there is the trip to go whale watching that we had to cancel because you got too sick to go. I actually made reservations for Mom, me, Jack and Joe to go whale watching this summer off Cape Cod. We are going to pick up Jack from camp (he is going for 2 months this summer!) in western Massachusetts and then we'll head east to Provincetown and go out on a boat.

Aaron celebrated his 7th rebirthday this past weekend having had an unrelated transplant in Minneapolis. He was discharged from the hospital on Day 20, readmitted briefly around day 25, discharged on day 28. Around day 100, we were headed home to Toronto.

Since transplant, he has visited Newfoundland, got a Dutch sheepdog (big mistake!), eaten caribou, flown to Iceland, walked through the New Hampshire woods, seen whales, met his donor, eaten blood pudding (if you don't know what it is, you don't want to), climbed a volcano, read all the Harry Potter books, played with a crab in a tidal pool in New Brunswick, ridden Splash Mountain (but didn't enjoy the fast part), hung out with Bill Cosby (they go way back), seen the original geyser (called Geysir), been up close and personal with a moose, had cataract surgery, gone swimming, seen Billy Elliot on Broadway, memorized all the songs in Sweeney Todd (the stage musical and the movie), started riding the subway home from school and much, much, much more.

Aaron is now a grade 11 high school student. He has been in several school drama productions and studies improv. at Second City's training centre here. He plans on becoming an actor. He will be a great one.

I consider that success.

I'm going through a lot of notes that I've written to you and I'm going to try and get it all online. Here is something I wrote

I was trying to mute how I was feeling by cranking up.

I am guessing that I was sad and the way I dealt with it was turning up the music - probably in the car - so loud that I couldn't think... or feel.

This is the background on my login on the computer in the basement. 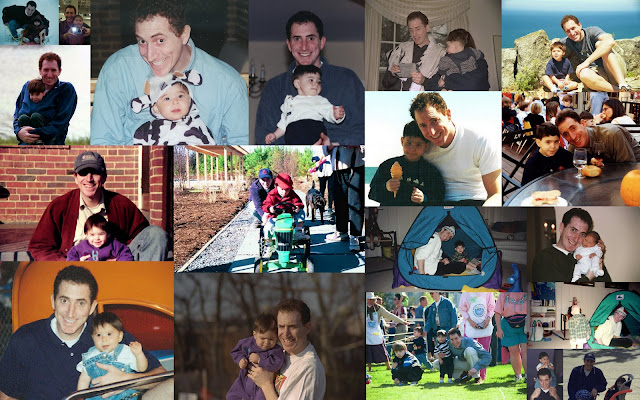 Posted by Allen Goldberg at Saturday, February 27, 2010 No comments:

Micah died. Everyone is pretty sad. The cemetery was covered in snow. I really don't like the word "predeceased." I remember Ethan's funeral. It is all so wrong. Beth will be okay - but not for a while.

Micah H. Naftalin, a lifelong Washington, D.C., resident and a leading religious and human rights activist for the past 20 years, died at his home Dec. 23, following a long battle against end-stage renal disease that resulted in cardiac failure. He was 76.

At its height during the era of the Soviet Jewry movement in the 1980s, the Union of Councils and its more than 40 local councils in cities across the United States had a total membership in excess of 100,000.

Naftalin "played a very important role in advancing the cause [of Soviet Jewry]," said Mark Levin, executive director of the Washington office of NCSJ-Advocates on Behalf of Jews in Russia, Ukraine, the Baltic States and Eurasia.

Under Naftalin's planning and operational leadership, the monitoring by the Union of Councils became the principal source of primary data on religious discrimination and, especially, anti-Semitic and xenophobic hate crimes and propaganda across the former Soviet Union, with special emphasis on the Russian Federation, Ukraine and Belarus.

"I am deeply saddened by the loss of such a great human rights leader within the Jewish community," Larry Lerner, UCSJ's president said in a statement. "Micah was a friend and colleague whom I admired for many years. He will be greatly missed"

Naftalin was a graduate of Bethesda Chevy Chase High School and attended the University of Maryland for two years before earning a bachelor's degree in music from Brandeis University in 1955. From 1955 to 1957, he served in the U.S. Army, in Korea, as an enlisted man. He received a juris doctor degree from The George Washington School of Law in 1960.

"He was a lifelong Zionist, as were his parents," said Rabbi Emeritus A. Nathan Abramowitz of Tifereth Israel Congregation in the District, where Naftalin was an active member, having served on the board of directors and as vice president. "He was interested in Soviet Jewry because he was interested in all things Jewish and Israeli."

Before joining UCSJ, Naftalin was an aide to former Rep. Carl Elliott (D) of Alabama, with whom he advocated successfully on behalf of the National Defense Education Act supporting vocational education, and with whom he later practiced law. He served as chief counsel and deputy director of the U.S. House of Representives' Select Committee on Government Research and as a senior policy analyst with the National Academy of Sciences. In these roles, he was a prominent opinion leader in the emerging field of science and technology policy analysis.

Eager to serve the Jewish community professionally, according to Abramowitz, in 1982, Naftalin joined chair Elie Weisel on the U.S. Holocaust Memorial Council, where he was appointed deputy director and, later, acting director. He served on the council for five years, during which time the council selected a museum site and began its Campaign to Remember -- a title he suggested.

In pursuit of his passion for religious and human rights, Naftalin established close consultative relationships with the White House, Congress, the State Department and the media. He briefed them regularly on incidents, trends and policy issues related to the status of Jews, anti-Semitism, and the general human rights situation in the former Soviet Union.

He represented the Union of Councils at the Conference on Security and Cooperation in Europe, as well as at other international human rights conventions throughout Europe and North America. In 1990, in Moscow, Naftalin presided over the founding of the Russian-American Bureau of Human Rights, the first Western human rights organization ever registered in the Soviet Union. Since then, Naftalin managed the establishment of six additional human rights and rule of law monitoring bureaus in Tbilisi, Lviv, Minsk, Almaty, Bishkek and Riga.

In 1995, Naftalin represented the United States Government as an official public member of the U.S. delegation to the Conference on Security and Cooperation in Europe as well as at other international human rights conventions throughout Europe and North America.

"For 22 years, Micah devoted his creative and constructive energies to Soviet Jewry," said Abramowitz in remarks he prepared for Naftalin's funeral. But he also recalled other qualities that Naftalin's family members spoke of as he prepared the eulogy: his musicianship, his love of the Redskins and his strength and humor in the face of serious illness.

He was a former president of the Chevy Chase Elementary School PTA.

Naftalin was predeceased by his son, Ethan, in 2004. He is survived by his wife of 50 years, Beth; his children, Marilyn Weaver and Suzanne Rand, both of Washington, D.C.; and his grandchildren, Noah Weaver, Sydney Weaver and Ellie Rand.

Posted by Allen Goldberg at Saturday, January 02, 2010 No comments:

It's New Years Day. We are in St. Michaels. Home.

Mom is on the phone with a reporter from a newspaper in Baltimore who is doing a story about Hope for Henry starting its program at Sinai Hospital. I just slipped her a note that said, "make sure to mention your book." And Mom whispered back that the reporter has already read it. I am glad there are people getting to know you who didn't know you.

Todd Snider, who I love and who is mentioned in Saving Henry, sings a song about his friend Eddy who died on New Years Day 10 years ago. I wonder how he does that night after night without crying. I love that he remembers him that way. John Prine, who I also love, sings a song in every concert called Souvenirs. He wrote that song with his really close friend Steve Goodman, who died of leukemia.

Chorus:
Memories they can't be bought
They can't be won at carnivals for free
Well it took me years
To get those souvenirs
And I don't know how they slipped away from me

I guess it is a bit like Alex Ovechkin kissing the sky after he scores each goal. Maybe this blog is my Souvenirs.

Saving Henry is Mom's.  I don't how she is going to read from the book at book parties and readings and not cry.

Posted by Allen Goldberg at Friday, January 01, 2010 No comments: