There is something that is really big these days online called Facebook. Your brother Jack just got started tonight. I know this might sound strange, but he is now Facebook "friends" with your friends. Jack also became friends with cousins Michael, Hannah and Emma. He is "chatting" right now with Sam Shoyer.

Here is something that Emma posted yesterday. It appears you're on Facebook too. 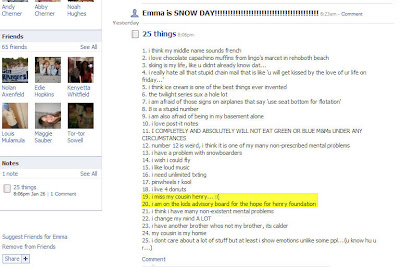 We had a vacation and an Inaugural since I last wrote you. I'll get you caught up soon. Sorry.

How terrible/crazy is it to see these both in the newspaper on the same day. Actually, the same thing happened before. I will look back and find that.

Unfortunately, we know that whole ventilator/University of Minnesota thing. Let's hope for a good outcome. 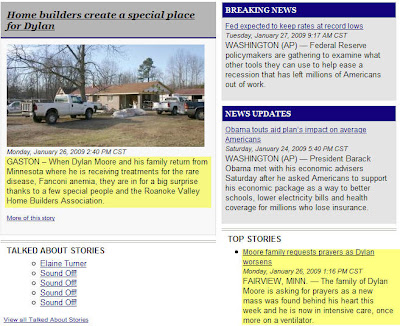 GASTON – When Dylan Moore and his family return from Minnesota where he is receiving treatments for the rare disease, Fanconi anemia, they are in for a big surprise thanks to a few special people and the Roanoke Valley Home Builders Association.

Since the progression of his disease has severely weakened his immune system, Dylan, who has always had to share a bedroom, will need his own separate room and modifications made throughout the home, said Joey Elias, president of the builders group. The main problem was the Moore’s home just wasn’t big enough to create a separate special area for Dylan.

There was, however, a nice carport attached to the brick home. It doesn’t take much imagination to guess what the group of builders decided to do with that carport, but most would think one simple bedroom. What the group has done is transform the carport into a bedroom suite, complete with its own bathroom and closets. The suite is attached to Dylan’s parents’ bedroom through their bathroom, with a separate laundry area and hallway entrance that now exits into a new bricked-in carport.

Elias and several others were busy putting the finishing touches on the construction Friday, installing trim work and getting everything ready to paint, a chore planned by the Moore’s family and friends. “This wasn’t all our idea,” Elias quickly pointed out. “The people behind all this have done a lot more and they really don’t want to be mentioned. It’s just that we, as a group, try to do something like this, at least one project each year, so when they contacted us, we jumped right in.”

When he says “jumped right in,” he wasn’t kidding. The group of RVHBA members and friends started the work on the Moore’s house the week before Christmas. What the group of builders has accomplished is amazing. “We’ve got people who are involved in home building from every trade, so I feel badly that we are here now, because we just got here,” Elias said of the group working on Friday. “All of the others did most of the work.”

Elias said Mike Copeland did the framing, Rightmeyer Equipment Rentals provided all the landscaping and heavy equipment used and most of the concrete work. Lloyd’s Decorating Center donated the paint supplies and will help with the flooring. Weaver Insulation donated all of the insulation and Bill Freeman Roofing donated all the labor to seamlessly blend the new roof in with the existing one. “Once again, I feel badly because I know I’m leaving out so many people who have been involved in Project Dylan,” Elias said.

There is one big push going on now to finish the project because the Moores are expected to return home by the end of January. Elias and the guys working Friday were a whirlwind of activity. Once they are out of the way, the final painting will start and the flooring will be installed. The finishing touches will be the landscaping, which John Pittman Landscaping will handle.

What the Moores see when they get home will surely amaze them.

With Dylan’s special needs, this group of builders has made life much easier for the Moores. Elias said it is just another example of how caring people are here in the Valley. “When we heard about the family in need, we all just came together and got it done. The one’s who called us are the one’s that deserve the credit, but that’s just the kind of people they are,” said Elias.


FAIRVIEW, MINN. — The family of Dylan Moore is asking for prayers as a new mass was found behind his heart this week and he is now in intensive care, once more on a ventilator.

The 8-year-old child was reportedly scheduled to leave the University of Minnesota Children’s Hospital in seven days, and the family had been counting down until the time when they could all be reunited.

His mom, Betsy, on the family Web site, caringbridge.org/visit/dylanmoore, said, “I can’t believe that in seven more days, we should be home. Here we sit in ICU praying harder than we ever have before that we will all eventually come home well.”

Moore’s most recent tumor effected his heart and lungs. He is on chemotherapy now, in hopes of shrinking it quickly, but according to Betsy, Fanconi patients don’t fare well with chemotherapy. “We pray that he will not have to have any more radiation because FA patients do not tolerate it well. If the mass hasn’t decreased he will have to have more treatments to shrink the mass until the treatments, the T-cells, or Dylan’s immune system can fight this.”

Moore’s Web site has daily updates on his condition and allows messages to be sent to him and the family. The family said to please continue to send messages as they mean so much to her son. “Thank you all for all of the prayers and support. It means so much to us. Dylan wanted to hear all of his messages tonight so I read him every one. Your support has really helped. Keep the messages coming. We love to hear from all of you.”


Hen, this is how our world went from perfect to topsy turvy. The only thing you don't hear in this video is the sound of the timebomb starting to tick.

Nana unearthed this video when we were out in St. Michaels for New Years. It was your Yahrzeit, the 6th of Tevet. This was incredibly hard for me and Mom to watch. It was the first time we'd ever seen it. All of a sudden the future goes from innocent and bright to dark and scary.


Welcome to the world beautiful Henry from Allen Goldberg on Vimeo.

Well, at least I knew you were going to be a girl. I don't remember that Mom thought you'd be a girl. Way to prove 'em wrong, boyo!

Posted by Allen Goldberg at Tuesday, January 13, 2009 No comments: 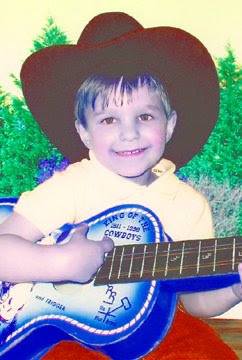 ROANOKE RAPIDS— After two months, Dylan Moore is starting to show progress in his recovery from a bone marrow transplant he received in October. Moore, a 7-year-old who has stolen the hearts of all who know him, suffers from a rare form of anemia, Fanconi anemia.

Family and friends have rallied to support the family, and several fundraisers sponsored by the Eagles Club and many others were held to provide for the family during Moore’s lengthy illness.

Moore suffered from kidney failure early on after the procedure and had to endure dialysis daily. He recently developed an infection, similar to mono, and was put on a respirator. High fevers and  unanswered questions plagued the family as everyone held their breath and prayed for a miracle.

Moore was finally removed from the respirator about a week before Christmas. Worry still prevailed however, as his kidneys still refused to function.

Early Christmas Eve morning, prayers were answered as Moore’s kidneys functioned for the first time since his surgery. “It was only a little and it was the color of coffee … This is a very good sign that his kidneys are trying to work some!!!!” wrote his mother, Betsy.

She went on to say that he is still having trouble with the dialysis, his blood pressure jumps all over the place, his heart rate slows to unthinkable levels, and doctors don’t understand why he has such sever reactions. Perhaps the new developments in his recovery will negate his need for dialysis soon.

In the meantime some of his family has come in and he will be able to see them for Christmas.

Posted by Allen Goldberg at Saturday, January 03, 2009 No comments: