Reading the sports pages lately has been really depressing, but I didn't think I'd break down and cry this morning while getting ready to take the guys to the bus.

I read a story about this kid from Gaithersburg, Max Bass, who has leukemia. It is a really wonderful story. I couldn't help wondering why no-one has stepped forward to get Max and his Dad tickets to the game, though. 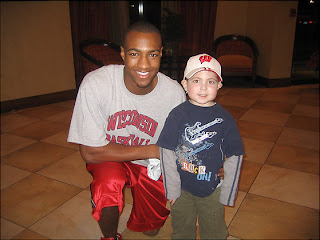 For Guard and His Fan, Strength in a Number

OMAHA -- Somewhere among the socks, shirts and toiletries Michael Flowers packed to take with him to the first and second rounds of the NCAA tournament is a No. 22 jersey. It is significantly smaller than the No. 22 jersey Flowers wears during games, the one with "Wisconsin" stitched across the front.

This one says "Kidball" and is one of Flowers's most prized possessions. Max Bass gave him that jersey last December, the night Flowers realized his definitions of words such as "courage" and "determination" were underdeveloped.

"I take it everywhere with me," Flowers said. "I have it here right now. It's not leaving my possession. It's something that I value, that I appreciate. It's a reminder to never take life for granted."

Max Bass looks up to Flowers because the Wisconsin guard represents everything that has defined the Gaithersburg child's life -- tribulation, perseverance, diligence, triumph. Michael wears No. 22, just like Max.

Flowers, though, says Max and his family have done more for his personal growth and maturity than he could ever dream of doing for them. When you discover you are the idol of a kindergartner who has battled leukemia since he was 2 1/2 , Flowers says, you grow up in a hurry.

Max's father, Adam, was the one who first put 22 and 22 together, and in the year since Max became enamored of his Badgers role model, several lives have changed. It started with Max and Michael's, sure, but the ripple effect of the pair's bond spread beyond a 5-year-old boy battling a deadly disease and a college basketball player searching for serenity.

Flowers "always checks up on Max, and we check up on him," Adam Bass said by phone late last week. "And obviously we watch every game."

Today was the first morning [Max] awoke early due to hunger. So at 5 am, Adam made Max his new favorite request: Macaroni & Cheese. Although his appetite has increased, Max is still a picky eater and now craves only starches and salt and nothing sweet.

Max Bass first saw someone else wearing his jersey number in early 2007, when his father, a Wisconsin alum, was watching a Badgers game on TV.

Adam proceeded to tell his son about Michael Flowers, the hard-nosed Badgers guard who never lacked for energy or effort. When Max took interest in Michael, Adam thought about the basketball class in which Max was enrolled, about how proud Max was when he came from class one day with his very own No. 22 jersey.

All the medications Max was taking were robbing him of the strength he needed to shoot the ball. He watched his friends casually make shots and wondered why he couldn't do the same.

So, Adam told Max that if he worked as hard as Flowers, those baskets were sure to fall eventually.

The following week, before his basketball class, Max told Adam he was going to be just like Mike -- Flowers, that is. Soon after, Max was able to make baskets with ease.

Adam told the story on a Wisconsin basketball message board, where Flowers's family and friends first learned of Max. Soon after, Adam and Flowers began exchanging e-mails.

Max's schooling and treatments kept the Basses from attending any Wisconsin games last season, so this season, they were determined to give their son a chance to meet his hero. Max's mother, Jamie, is a Texas alumna, so a December trip to Austin for the Badgers game against the Longhorns was arranged.

After Flowers made a three-pointer to beat Texas, the Basses were crying as they made their way down to the court, where Adam approached a man wearing a No. 22 Wisconsin jersey. Ted Flowers was standing courtside with his sister, Angela Kier, waiting for his nephew -- her son -- to come out of the locker room.

"He thought I was Michael's father," Ted Flowers said. "He introduced himself and asked. I said no, but introduced him to Angie. Adam was crying and stuff, and I'm trying to figure out what's going on. Then he tells me the story."

Adam told Ted about his son, Max, and about the influence Michael had had on Max's life. He told about the leukemia, how difficult the past few years had been, how much better the future looked now. After Adam was done, he took Ted and Kier over to meet Jamie and Max. Ted could not get over how strong the kid looked.

"I had been going through some difficult times myself last year, and the courage and determination I found in Max has helped me," Ted said. "If he can deal with that, then what I'm dealing with is nothing by comparison."

Ted doesn't want to talk about his personal struggles. He says it was a difficult time in his life and wants to leave it at that.

His problems were compounded last August when he spent two weeks in a hospital after suffering a heart attack. Ted said he has a heart condition that made the situation more precarious.

Even after taking six weeks off from his job as a database administrator at a grocery wholesaler in Houston, Ted said he couldn't get over his pain, couldn't let go of his suffering.

"I was really down and depressed," Ted Flowers said. "Then I met the Bass family, and it was like, almost immediately I was lifted up out of it. I was able to take my circumstances, set them aside and not dwell about it as much."

The other night he woke up shaking, he vomited and spiked a fever so we took him to the hospital. They gave him some antibiotics, and we were able to return home because his blood counts were high enough. But last night, the hospital called back and said his blood culture from the other night was a growing a bacterial infection and that we need to bring him back in until they can identify the specific bacteria.

Michael Flowers was more nervous the night before that game at Texas than he was before tip-off. He was riding the elevator at the team hotel, moments from meeting the fan he never expected.

For the next 25 minutes, Max asked Flowers every basketball-related question he could think of. Who's your favorite player? Can you dunk? How much do you really practice? Flowers kept smiling as he answered each query.

"Everything was just, you know, instant chemistry between me and Max," Flowers said. "I think that's something special when you first meet somebody but you feel like you've know them for quite a long time."

Before it was time to go, Max gave Flowers one of his No. 22 jerseys. Angela Kier, Flowers's mother, said her son, who took a two-week leave of absence just before the season for personal reasons, started taking back control of his life the night he met Max.

"I consider Max a guardian angel for Michael," Kier said. "For Max to come into Michael's life has helped him, and because it's helped Michael, it's helped the family. He was going through a lot, and it affected everybody because we're such a close family."

Kier said that six months ago she wouldn't have felt right burdening her son with her problems, but now, she finds herself going to Flowers for guidance and comfort.

During a nationally televised game against Indiana in Madison on Jan. 31, television cameras panned to Flowers just after Coach Bo Ryan had pulled him out of the game.

"There was Michael, beaming, huge smile," said Ted Flowers, who was watching from Houston. "My sister said she hadn't seen Michael smile like that in a long time."

Michael Flowers's coaches have noticed a difference in the senior guard, as well. Assistant coach Greg Gard said Flowers has always been a soft-spoken person whose self-assurance would often wane.

"One of the things that helped his confidence as much as anything on the floor was him realizing the impact he can have on other people and how much people look up to these guys as role models," Gard said. "I think that was huge for Mike, to get a firsthand affirmation the type of impact he can have."

Max's past 2 treatments have gone smoothly. His next appt. is this Friday (Dec. 21) and he is due for a spinal tap so it will be a long day. We have to go in around 10 am, but the spinal tap itself will not happen until noon, so that means no eating until like 1:30. The past few times, Adam has gotten up with Max in the middle of the night to feed him and that seems to help.

The morning after his most recent spinal tap, the first thing Max wanted to do was watch the replay of the Badgers' first-round win over Cal State Fullerton. After that, he watched the tape from Wisconsin's win over Penn State that clinched a share of the Big Ten regular season title.

The doctors have told the Bass family that Max is doing so well, he might be able to stop his treatments altogether in May. At that point, they'll find out whether Max was being kept healthy by his own body or by the medication.

The Basses have kept in contact with Michael and his family since meeting in December. Adam said he regularly exchanges e-mails with Michael, Ted and Angela.

In February, the Basses traveled to Madison to watch the Badgers take on Minnesota. Wisconsin won, improving to 2-0 with Max in attendance. After the game, Max got to go into the Badgers' locker room. Michael Flowers introduced Max to the players and coaches. Then the team included Max in a huddle that ended with, "One, two, three, Badgers!"

"Max talks about that to this day like it's the greatest thing that's ever happened to him," Adam said.

Friday, the third-seeded Badgers will take on 10th-seeded Davidson in the Midwest Region semifinals in Detroit. Adam said the Basses have every intention of attending that game, provided they can find tickets.

Michael Flowers's eyes light up when he talks about the possibility of seeing Max again. He said he never imagined a basketball player could have such an impact on a 5-year-old boy who lives half a continent away. He said he is now more conscious of how he presents himself in public.