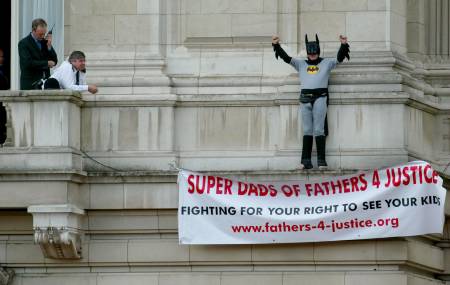 LONDON - Yes, that was Batman scaling up the front wall of Buckingham Palace today.

At least a protester dressed as the caped crusader.

Other protesters and witnesses say the man reached a ledge near the balcony where the royal family appears on ceremonial occasions.

The protester, a 33-year-old man, belongs to a group that seeks greater custody rights for fathers.

No member of the royal family was at the palace.

A spokesman for Fathers 4 Justice says the protest was timed to coincide with the trial of another member of the group, who is accused of throwing purple flour at Prime Minister Tony Blair in the House of Commons in May.

Email ThisBlogThis!Share to TwitterShare to FacebookShare to Pinterest
Labels: Batman