I started this two weeks ago…

I am on the train up to New York. Mom and Joe are across the aisle and I am sitting next to Jack. I am looking at Mom, who is trying to sleep, and Joe is watching SpongeBob (Season 3) on Mom’s iPod. Joe is not letting Mom sleep. He keeps touching her and patting her. I feel bad for Mom, but Joe can’t help himself.

Two days ago Mom said, “Joe has been sick for 16 days.” She was definitely counting and definitely worried. He had a fever that just wouldn’t go away. I am of the “lightning can’t strike twice in the same place” school so I wasn’t as worried as Mom. I knew or was just wishing it was something that was taking a long time to go away – especially since Joe isn’t the type to necessarily lie around and let himself get better. He was pretty peppy even with 103 temperature.

He seems to be getting back to normal now. Jack caught a bit of what Joe had and I am trying my darndest not to get sick myself. Remember the time we all went up to New York and Mom was sick and you and Jack were sick and we were staying in the residence at Cornell Hospital. That was pretty miserable. Even though we are the cough-a-lot family freaking out everyone sitting near us, hopefully everyone will all be feeling better for this visit.

Mom’s up now. She only needs to nap for 15 minutes to feel good. I need at least a 3-hour nap or else I feel groggy.

Your bothers are “inconsistent communicators.” Most of the time they won’t engage in much of a conversation with me. And sometimes, infrequently, they just burst open and can’t stop talking. I never know which it is going to be. Ceaseless yapping or silence.

Nicely, and from out of nowhere, the other night Joe and I actually had a nice chat.

I don’t know how I got into it, but I told Joe all of my grandparent’s – your, Joe and Jack’s great-grandparents’ -- names. There was Grandma Bertie, or Bertha Goldberg; Grandpa Hymie, or Hyman Goldberg; Grandma Gus, or Augusta Baum – kinda like Augustus Gloop; and Grandpa Nat or Nathan Baum. I told Joe that I wanted to name each one of you Nat at some point or another. It started with you, but Mom said “no way.” I remember exactly where we were, driving down Old Georgetown Road past my nursery school (a church), when I brought it up. That name option lasted for maybe, I don’t know, less than a minute.

It was less to honor my grandfather, who I don’t remember all that well other than driving a Red Cross ambulance, and more because I like the name. Joe was definitely interested in the name because it is the nickname of the Washington National’s baseball team. He then said something that intrigued me. He said that we should have named him, “Senator.” He was talking about the old baseball team here – also nicknamed the Nats – but I was thinking how cool it would be to walk around and say, “Hi, I am Senator Goldberg,” like you were a United States Senator, one of those people who gets elected.

Joe thought a little more about it and argued that instead of “Joe,” we should have named him Ryan Zimmerman Goldberg or Alfonso Soriano Goldberg. I apologized to him for not having thought of that when he was born.

I told Joe about your great-grandparents and that I didn’t really know any of them. Gus and Nat were were Grandma Phyllis’ parents. Bertha and Hyman were Papa Teddy’s parents. I then thought it would have been funny if I called Grandpa Hymie, Papa Hyman – but that is funny just to me and high school boys.

Grandma Gus died when I was one – just like you dying when Joe was that age. I don’t remember ever knowing Grandpa Hymie. Grandpa Nat and Grandma Bertie were the ones who I remember seeing more than once. They all lived in a place in New York called Brooklyn. That is where I was born.

I have a picture of you, me and Grandma Bertie. I'll find it and put it here. Mom and we visited her once a long time ago. I may have told you how she gave me a can of soy beans when I was growing up. It was the only present I remember getting from her. She wasn’t what you would call a “warm” woman or grandmother. But she lived a long time. She was 99 when she died.

Over Thanksgiving in St. Michaels everyone (but me) talked about what we were thankful for. Here is a page that Joe did at school. He is learning to read and write. He is doing really great. I hope he is as smart as you and Jack. 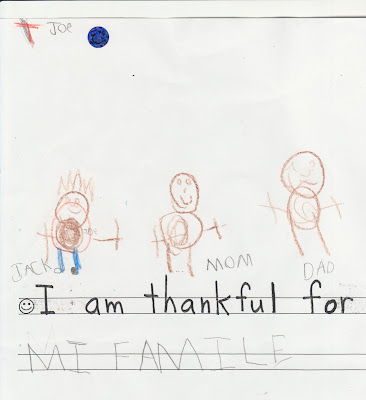 Jack then said something very quickly about how Mom and I were bummed out that when he was born he wasn’t a match for you. Mom and I looked at each other and a silent, “Where’d he get that from” look passed between us because we couldn’t figure out “Where he got that from,” and more importantly because it was totally untrue.
Mom took Jack aside at some point over the weekend to talk to him about this.

It is Saturday morning a week after I started writing to you. Now I am sitting watching Joe at a University of Maryland winter baseball camp. Mom and Jack brought Joe last night and I am with him today. We are in a big indoor practice bubble across the street from where I lived when I went to school here. My dorm was called Denton. I am remembering when you and I came here late one night after your doctor appointment in Baltimore. We went to the Student Union to get a basketball jersey but they were closed. You were a big Juan Dixon fan. We were so bummed.

Joe and I sat on a bench next to this kid named Dylan and his mom while we were waiting for the camp to start. It is pretty cold even though we are indoors, so I suggested to Joe that he and Dylan run all the way to the end of the field and back to warm up. Dylan said he didn’t want to. Joe then looked at me and said with a half-smile, “Dylan came in last yesterday.” And then he repeated it and smiled at me again.

I don’t know why he does stuff like that. He is basically a good kid and a good hearted kid but this is something that he needs to work on. He is 6 and talks “smack!”

I think talking smack and talking trash are different things. I need to look that up.

You know that it is okay to be competitive, but Joe feels like he needs to remind others that they aren’t as good as he is, whether it is the kids in his class, this guy Dylan or even Jack. Mom and I have talked to him about this a lot but he keeps doing it. Joe’s coaches repeat the same thing over and over about the proper stance for hitting or for being ready in the field. I guess we need to just keep saying the same thing about being nice to others and “worrying about him” over and over again. Repetition teaches the fundamentals.

I took Joe aside and said that while that Dylan may have “come in last,” it wasn’t a nice thing for Joe to say or bring up. I want Joe to be the kind of kid who helps other kids, not makes them feel bad.

A lot of it – at least today -- is my fault. I lied when I signed up Joe for camp. I said he was a year older than he is because you need to be 7-years old to go to the camp. Aside from doing what he loves, my thinking was that being with kids who are older, bigger and better; Joe may learn a little humility. He may have a 7-year old’s skills but he may not be “mature” enough otherwise. He has problems sitting still like the others listening to the coaches. Next year will be better.

I also know that a big part of what bugs me is that growing up I was Dylan. I was the kid coming in last.

When we’re done here I will say that to Joe and see if that helps. I'll tell you one thing -- if that is our biggest problem, we are doing okay.

We finally did find out what was wrong with Joe last month. He had pneumonia. Although he may have gotten better quicker if we knew earlier what was wrong with him, I know that in a way it was a good thing that we learned after he was getting better that it was pneumonia. Pneumonia, which I think is simply an infection that is in your lungs, is ultimately what killed you. Joe’s infection was mycoplasma, yours aspergillus.

Here are pictures of you and Jack the morning of the day you were admitted to the hospital for the first time with pneumonia. 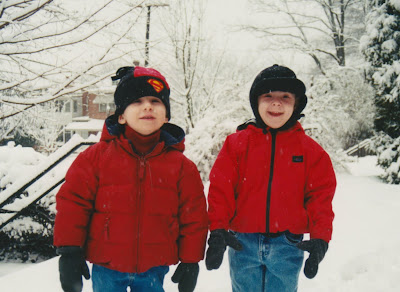 I was here alone with you and Jack, while Mom was in New York doing IVF. You were complaining that your shoulder was hurting you (and it was your shoulder that what was bothering you again in Minnesota at the end when you had pneumonia but no-one could figure out what was wrong), and I finally took you down to Georgetown in the evening. I wonder who came over to watch Jack.

For a while it looked pretty bad for you. Mom had to choose between coming back here and seeing you before you died or staying in New York to keep trying to have a baby who would save your life. Although Mom is incredibly strong, no-one should ever have to deal with those kinds of decisions. Fortunately, you got better and Mom was able to stay in New York. Our life was pretty dramatic at times.