Mom and I both got this email the other day from Matt Brenner. You remember Matt from VarsityBooks. He is in the club of people who I think I look a little like, which includes Dave O. and Jeff Levy. When Mom and I talked to each other about the email, aside from being excited for Matt and Sarah, we asked the same thing, "what's the baby's name?" I thought maybe it is is a Jewish tradition/superstition that you don't announce the name until the bris. Other than that, we couldn't figure it out.

Then we got a call from Matt and it all made sense.

With great happiness and joy, we are delighted to announce the birth of our son.
Born: June 24, 2009
1:33 a.m.
9 pounds, 4 ounces
And a full head of hair!
We will be naming him according to tradition at a Brit Milah ceremony (ritual circumcision), eight days following his date of birth. As is customary, no formal invitation is issued -- all are welcome to attend.
The brit will take place on:
Wednesday, July 1, 2009
Ceremony begins at 5:45 p.m., followed by a Seudat Mitzvah (celebratory meal for all in attendance)
Congregation B'nai Israel
2111 Bryan Avenue
Tustin, CA 92782 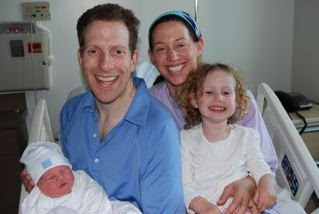 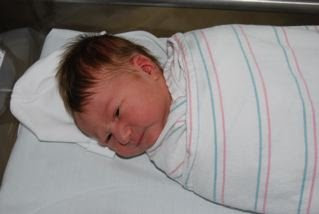 The commandment for the Brit Milah was the first God gave to Abraham. There is a tradition that this mitzvah should be performed zealously, and so on the eighth day, many people look to perform the brit as early as possible in the morning as a sign of their devotion. While the Rabbis and scholars espousing this view were certainly well-intentioned, it is unlikely that they ever commuted on a freeway. Indeed, successfully attending a Brit at 8 a.m. by commuting on either the 5 or the 405 would not constitute a mitzvah, it would constitute a miracle. So make no mistake: we are excited and blessed to be here today, no matter the time, and thank all of you for joining us.
We are naming our son Hersh Shlomo, Hersh for my father, and Shlomo for Sarah’s paternal grandfather. In English, his name is Henry Sidney, also for my father and Sarah’s grandfather, with thoughts of two others as well.
The name Henry is for my father Harry Brenner. Harry spent his working life as an engineer, beginning at the Navy Department in Washington DC and later starting his own business in Los Angeles, focused on testing and confirming the safety of the critical parts that hold our buildings, airplanes, spacecraft, and even golf clubs together. He also valued Judaism and Jewish life, beginning as an international leader of B’nai Brith Youth and continuing on with constant yet unassuming involvement in his synagogue and B’nai Brith. Most importantly, he was fully devoted to his five grandchildren, babysitting, attending little league games, and generally doing everything he could to support and love them. While he didn’t make it to see our children, his devotion to them is unquestioned. He would get a real kick to know that his grandson is named for him. Long ago, the name Harry began as a nickname for Henry, and so while the names come from the same place, they are different. My dad would have certainly encouraged Henry to be his own man, and not be bound by any path that my father himself had taken.
In naming Henry, we also remember Henry Strongin Goldberg, the son of our friends Allen and Laurie and the toughest guy I ever met. Henry faced overwhelming odds from birth, due to a rare disease that subjected him to medical challenges and procedures beyond anything that any of us can comprehend. During his seven short but full years, Henry did not allow the disease to define him. Instead, he showed constant strength and courage in facing any surgery or treatment thrown his way, all in a fierce and determined battle for what we all take for granted – living a normal life. You only needed to meet him once to understand what it means to completely embrace life, from mixing it up with his brothers to idolizing Batman. His gravestone quotes Harry Potter – The Boy Who Lived – and it could not be more apt. In his short life, Henry taught that one must confront obstacles head on and appreciate all of life’s possibilities, particularly the routine that we take for granted. For our son, we wish some measure of the strength and positivity Henry possessed.
The name Sidney is for Sidney Musher, Sarah’s grandfather and husband to grandma Hadassah. He made great contributions to all of our daily lives and our most important interests. When you look in a supermarket aisle and find food that’s remaining fresh, you see the results stemming from one of the 200 patents Sidney obtained in food and pharmaceutical technology. When you read of Israel’s technological innovation and entrepreneurship, you see an Israel that Sidney envisioned when he initiated the Israel Research and Development Corporation, served on the Prime Minister’s Council for Economic Development, and was a philanthropist and dedicated supporter of Hebrew University and all technological development in Israel. And for the extended Musher family, you see it in the close relationships that all cousins have with each other, made possible by the annual vacations that Sidney and Hadassah sponsored that continue today, most recently in honor of Hadassah’s 97th birthday.
Finally, in naming our son, we also remember Sidney Daye, the father of Henry’s Aunt Sandy who passed away a month ago. Sidney was a man of quiet strength and devotion, married to Selma for 63 years. Sidney, together with Selma, was a marvelous grandparent not just to his two granddaughters Morrisa and Yonina, but also to their cousins Ariel, Zachary, Jordan and Tali. Henry would certainly have been included in this group. Sidney’s low key demeanor meant that his resourcefulness and dedication might not be readily apparent, but I know first-hand of these traits, following the invaluable and timely assistance Sidney gave to me when my father was dying.
Henry, you begin life honored by the memory of generations, your great-grandfather, your grandfather, extended family and friends. You are surrounded by a loving family, including your sister Tali, Savta Esther, Grammy Ruth, Grandpa David, Great-Grandma Hadassah, and Great-Grampa Morris, over 100 years old and born while Teddy Roosevelt was President (we’ll talk a lot more about TR as you get older). Your broader family of uncles, aunts, and cousins, many who we’re lucky are here today and others who can’t wait to meet you soon, are thrilled that you have joined the family. And you are welcomed by friends near and far, including Tali’s good friend Karen who came over for a midnight sleepover with Tali last week that allowed Mommy and Daddy to make it to the hospital in time for you to be born. Barely in time – Mommy certainly would encourage you to complete projects with plenty of time to spare, as cutting it close to deadlines can be really painful! But whether you have tight deadlines, tough situations or any hardship that may come, you will know that you are surrounded by people who love you and a community that supports you, truly, l’dor v’dor, from generation to generation.