We had a Hope for Henry Board of Directors meeting on Friday. A lot of great people are helping out now. The meeting was at NAB, which is where I worked when you were born. They were nice to let us use their building. 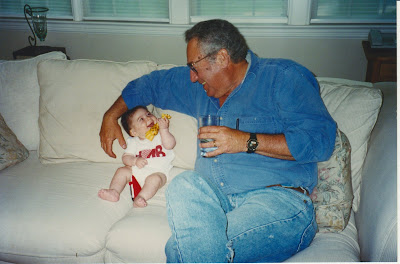 That's you in your NAB onsie talking with Papa Sy. Wondering what you guys were discussing. You look like you were having a great time.

Mom did a presentation to let everyone know what we've been up to the past few year. I got to talk about this story that was in the newspaper the day before the meeting.

On the video that goes with the article you can see Dr. Wagner. He couldn't make the meeting 'cause he is very busy saving kid's lives. And, if you look on the bed of the kid, Nate, you can see he is being distracted/entertained by his Hope for Henry Foundation portable DVD player. How cool is that. Well done, you!

Nate is on the transplant floor at Fairview. He looks like he is in one of the end rooms, not sure if it is yours (11?) or Molly's. He has a really tough disease, but he is in the best hands possible. 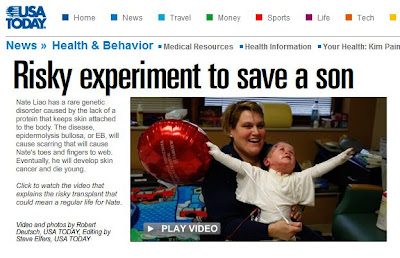 MINNEAPOLIS — A little boy, 18 months old, trains his solemn brown eyes on visitors to his room here at the University of Minnesota Children's Hospital, then, after a moment, breaks into a smile.

He doesn't have a lot to smile about. His face is marked by sores and blisters. His right ear is covered with clotted blood. His right armpit bears an angry red scar. Under the bandages that cover his arms, hands, trunk, legs and feet are more scars, more blisters. 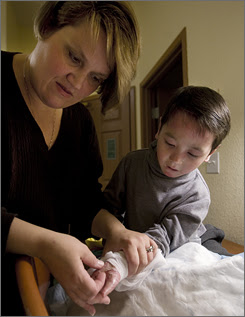 Nathanial Liao, called Nate, has a rare genetic disorder caused by lack of a protein that is needed to keep skin attached to the body. When he rubs his ear, the skin comes off. If someone lifts him from under his arms, his armpits blister. It affects skin inside his body, too. When he throws up, bits of his esophagus come up. The skin heals, but the repeated injuries leave scarring that eventually will cause his fingers and toes to web. In time, if nothing intervenes to stop his disease, he will develop an aggressive form of skin cancer. He will die young.

But now, Nate may have a chance. In a leap into the outer limits of medical knowledge, doctors on Oct. 19 transplanted bone marrow and cord blood cells from his healthy brother Julian, 3, through a catheter in Nate's chest and into his bloodstream.

Doctors hope the healthy cells will move into Nate's skin and correct the genetic defect known as epidermolysis bullosa, or EB. 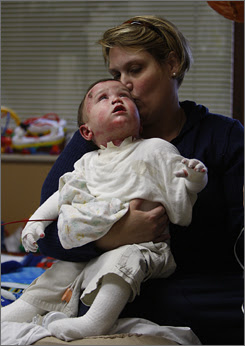 EB affects about 20 of 1 million babies born, but the most severe form, recessive dystrophic EB, which affects Nate and his older brother, Jake, 4, occurs in about 2 out of 1 million births.

If the treatment works, even partially, doctors say they may be able to try it on Jake in about six months. Until Nate's transplant, it only had been tested in mice genetically altered to have EB. The affected mice have a life span of two weeks, but in experiments last year, researcher Jakub Tolar of the Blood and Marrow Transplantation program at the University of Minnesota found that three of 13 mice infused with cells from the marrow of healthy mice didn't die. Their blisters cleared up, and their skin grew the missing fibrils that anchor skin to body.

Through trial and error, Tolar had isolated the cells that produced the missing protein, known as collagen VII, and corrected the genetic mutation.

"I was stunned," says researcher Angela Christiano of Columbia University, who identified the gene for dystrophic EB. When she heard the news, she flew to Minnesota to see for herself. "The fact that any survived, three out of 13 is tremendous," she says.

Still, it is unusual to go so quickly from a small mouse experiment with a 25% success rate into a human trial. That it happened at all is due to the persistence of Theresa Liao, the boys' mother.

Theresa, 37, and her husband, Roger, 44, an investment programmer, of Clarksburg, N.J., had never heard of EB and had no idea when their first son, Noah, was born in 1999 that they each carry the gene for it. With each pregnancy, there is a 25% risk.

Noah is healthy, but when their second son, Jacob, was born in January 2003, Theresa knew right away something was wrong.

"I said, 'There's something wrong with his feet,' " she says. "The doctors and nurses made a little wall so I couldn't see him."

Liao says experts told her all she could do was to keep Jake bandaged and comfortable for as long as possible. 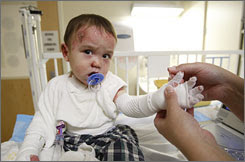 "That wasn't good enough," she says, and she began a personal campaign to find researchers who would try to help and to raise money for their work.

She "was just not going to stop until she found something," says Madeline Weiner, a nurse educator in Chapel Hill, N.C., who works with the Liaos and other EB families. "She didn't just contact people, she pursued them. She didn't want to take a chance of missing an opportunity to help her children."

Theresa became pregnant with Julian, who was born in January 2005. A prenatal test showed he was healthy, and his bone marrow was a close, though not perfect, match to Jake's.

The parents decided to bank Julian's cord blood on the chance it could help Jake someday.

Then came her pregnancy with Nate. A prenatal test showed he had EB, and his marrow was a 100% match for Julian's.

By this time, Theresa had met John Wagner, head of the pediatric Blood and Marrow Transplantation Program and clinical director of the Stem Cell Institute here.

In spring 2004, he was in New York to make a speech on stem cells and had stopped in at the New York Blood Center. Theresa approached him and thrust Jake into his arms. "She said, 'Save my child,' " Wagner says. The baby "was bleeding, parts of his skin were coming off. I was really sort of shaken."

Wagner, who specializes in research on incurable diseases, says he often is contacted by desperate parents, but he couldn't forget the incident. "I came back from New York traumatized," he recalls. "I just couldn't let it go."

A chain of events had been set in motion. At a conference after that first meeting, Wagner met genetics researcher and EB expert Christiano, who told him about the mice engineered to get the disease and suggested the transplant experiment. With funds raised partly by the Liao family, Tolar began testing different types of marrow cells to see if he could correct the genetic defect in the mice.

Back in New Jersey, the Liaos were debating whether to carry on with Nate's pregnancy, grappling with the ethics of knowingly bringing a child with EB into the world.

They only had to look at Jake to know what lay ahead for the baby. Every fall, every bump means a bloody, painful new wound. Eating anything but soft foods can tear up his intestines, so he gets extra nutrients through a feeding tube implanted in his stomach. Fingers on both hands have fused because of repeated scarring. He has no toes. The full-body bandage wraps are changed every 12 hours, taking one to two hours.

Despite that, "Jacob is smart and funny, really wonderful," his mother says. The prospect of a second child with EB didn't scare her, she says. "I know what I'm dealing with."

But "my husband and I were on different spectrums" about the unborn baby, she says. "He didn't want to see him suffer. I didn't either, but at the same time, we found out that Julian and Nate were a six-out-of-six match," meaning all genetic markers match up.

Julian and Jake match four out of six. The closer the match, the lower the risk of rejection.

"Knowing we fought so hard for Jake, I felt this is the chance, this is the window of opportunity. If we threw this window away, what chance would Jake have?"

If ever there is going to be a cure for the disease, she says, someone has to go first. "God sent these boys to me for a reason. We've made it this far, and worst case, if we have a horrific result, and we have a mortality with Nate, I went down swinging. I'm not only doing this for my kids, but for everybody's kids. I did not do this lightly."

To reduce the risk that Nate's body will reject the transplant, he had to be given chemotherapy for eight days to essentially destroy his immune system.

"We have to eliminate it and then replace it," Wagner says. It's a risky procedure because "when we destroy the bone marrow, the patient is at risk for infection. He's susceptible to everything."

On that first day of chemotherapy, Wagner was nervous. He says he always is when a new, experimental treatment is about to begin. "I love what I do. But last night was a hard night, because at 4 in the morning, there's no turning back."

On the day of the transplant, Julian was sedated in an operating room at University of Minnesota Children's Hospital, Fairview, at 8 a.m. A doctor and nurse inserted two long needles through Julian's lower back into the bones of his pelvis and began withdrawing thick red liquid, the bone marrow containing blood stem cells. It took about half an hour to harvest 250 cubic centimeters, about a cup, of marrow. The liquid was processed to isolate the stem cells that would be infused into Nate that afternoon, along with the cord blood cells that had been frozen at Julian's birth.

"We know the cell responsible for correcting the (defect) is at least in marrow," Wagner says. "It may also be in cord blood. So that's the reason we're doing both."

He says there are no guarantees the transplant will cure or help Nate. "I've showed proof of principle this could work in an animal model, not in humans."

Wagner says Liao understands "it's possible Nate may not survive the next 100 days," but "she is also aware that if we don't do something, it will be a very difficult and shorter life for him."

The experiment also may point researchers toward treatments for other diseases.

"EB is a rare disease," Tolar says, "and in the history of biology and medicine, many cures start with a rare disease that then extends to others."

Whatever the outcome, Liao says the ordeal is worthwhile because something important will have been learned, some scientific advance toward a cure will have been made.

The strain of the treatment and being far from home is hard on all of them, she says. "But this is nothing compared to one day of EB."

Nate is expected to stay at the hospital for about three months. His doctors say he is doing well so far and improving a little each day.