I think I told you about this guy Bob Rinaldi, who found out about Hope for Henry when he was looking to do something to honor his brother, Michael, who was very sick. Bob is the guy who has worked with Mom to have pianos donated to a bunch of hospitals.

Bob's brother died last week. We are going to the funeral tomorrow. Bob and his other brother Chris asked that people donate to the Hope for Henry Foundation in Michael's memory. That is very sweet of them. They've been great to us. 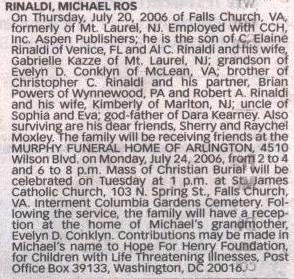