When little Molly Nash recently auditioned for "The Wiz," she belted out her favorite song as if her life depended on it. At one time, it did.

"Five hundred twenty-five thousand six hundred minutes: How do you measure a year in the life?"

For the Nash family, nothing measures the year following Molly's landmark, life-saving blood transfusion in 2000 like the theme song from "Rent."

"What that song means to me is that when I was really sick and in the hospital, my parents were counting every minute and every second we had together," said Molly, who turned 12 on July 4.

Molly's parents are Jack and Lisa Nash of Greenwood Village, who set medical history by the way they saved their daughter's life six years ago. Then they had to wait out another 525,600 agonizing minutes of recovery in a sterile isolation unit before learning that Molly would, indeed, survive.

"Time goes on for the world, but time stood still for us," said Lisa. "They say if you can make it through that first year, then you have a chance. But kids were dying all over that transplant unit. So 525,600 minutes? Yeah. I can tell you every single minute of that year."

Molly was born with Fanconi anemia, a rare and deadly genetic disease that prevented her from creating healthy bone marrow, which led to the onset of leukemia. By age 6, Molly lay near death. Her last best chance for survival was infused stem cells from the placenta of a nonexistent sibling.

The Nashes always wanted more kids but had feared passing on the disease to more children. Even if they were to conceive naturally now, the odds were 1 in 4 the child would have the Fanconi gene, and it would be four months before they would know for sure.

That was time Molly might not have, so they underwent selective genetic testing and in-vitro fertilization to produce a healthy match. After the seventh attempt, brother Adam was born, and Molly was saved. Three years layer, sister Delaine joined the growing brood.

"When Molly went to transplant, she didn't have much time left," Lisa said. "At Adam's circumcision, she was gray, and she had to be carried down the aisle of the synagogue because she could not walk."

The use of umbilical-cord blood to save a life was not new. But Adam is believed to be the first donor ever selected and cleared while still an embryo. Because of the worldwide attention that followed, perhaps it's no surprise that Molly now says, "I was born for the stage." She's been on a worldwide stage of sorts her entire life.

Adam to the rescue

Five-year-old Adam bounds down the stairs of the Nash home and into your lap enthusing, "Guess who made Molly healthy?"' Then he flashes a small framed picture of himself.

His mom says, "Adam, if you were a peacock, your feathers would be out to here." Within seconds he's entirely refocused on his "Monster Garage" video. Ah, 5-year-olds.

Molly was sick and Adam helped make her better: That's the sum total of what her children know, Lisa said. Otherwise, their sibling rivalry and revelry are textbook typical.

"She's the best sister in the whole world," Adam says almost too sweetly. But Molly knows the score. "He's good," she says, "but he can be annoying. He pulled my hair this morning."

In time, the pair will learn what all those boxes of press clippings in the basement are all about. They tell the story of a quiet young couple thrust into a worldwide spotlight for choosing to use existing technology to save their child's life.

When Molly was 6, Pre-implementation Genetic Diagnosis (PGD) was more science fiction than science to the Nashes. In it they saw not controversy, only hope - the birth of a second child would more than triple Molly's chances of survival.

Lisa has heard all the arguments about playing God with genetics, but she defies any parent to not try the same thing in her position. "I just say don't judge anybody until you've been standing in their shoes."

Molly Nash, right, is seen during dress rehearsal at the Space Theatre at the Denver Performing Arts Complex. She plays one of four Munchkins. (Post / Helen H. Richardson)

donor. But with so many kids dying on that route, Lisa opted for one last in-vitro try. Time was of the essence, and the stakes could not have been higher.

"When you go to Vegas, you know you are going to lose money. That's gambling," Lisa said. "Here we were gambling with her life. And it wasn't a few hundred bucks we would be losing. We would be losing our kids."

Still not convinced, Lisa wrapped Molly like a mummy and drove to Target, where five pregnancy tests confirmed it. "I'm watching it turn positive, one after the other, and I'm screaming in the stall," Lisa said.

"You laugh," Jack added. "I still have to live with these things."

He's not kidding. "I still have those pregnancy tests up in my closet," Lisa said.

Little did the family know, though, that their private godsend would soon become a public moral debate. After Adam's birth, photographers climbed trees outside the University of Minnesota Hospital to get pictures of the kids in the transplant room. The Nashes received a letter from the Vatican excommunicating them from the Catholic Church. "I mean, does that really mean anything ... when you're Jewish?" Lisa can now say with a laugh.

"When Jack and I were making this decision, we didn't do it for the world's approval. It was to save our family. More than that, it was to have a family, a healthy family. And then the world decided they were going to take issue with what we did?"

Jack, the general manager of the Hampton Inn and Suites, said while "we obviously used the technology to save Molly, the real reason was so we could have other kids."

As for the religious debate over stem-cell harvesting, Lisa emphasizes that Adam was never needled in any way. "After he was born, they took blood from his placenta, which they usually throw out," she said. Added Jack: "We should have gotten a rebate because we recycled!" 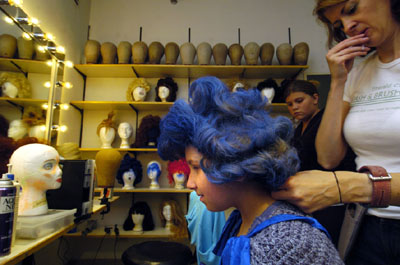 When Adam says, "My sister is a blue-haired munchkin," he's not being a bratty brother. Molly is playing just that in "The Wiz" for the esteemed handicapped theater group called PHAMALy.

PHAMALy enables people with disabilities to perform in a professional annual summer musical at the Denver Performing Arts Complex.

Molly has sat in PHAMALy's audience the past four years, wanting nothing more than to be on stage with them. "I think it's really neat," she says, "because I finally get to do something."

Lisa says Molly has always thought of herself as a little different, "but she's no longer different here," she said. "Nobody is. Yes, they have physical challenges. But among them here, they are all whole. And they are all perfect."

To notice what's wrong with Molly, you first have to get past that sweet toothy smile and that cackling laugh. It's that laugh, and her compartmentalized size, that got Molly cast as a munchkin in the first place.

With Molly wriggling in her lap, Lisa counts off five birth defects before she even leaves Molly's head. In all, she has "close to 20 birth defects," Lisa says. "That's all I can think of today."

Molly asks, "What are birth defects?"

"They are the things that make you special," her mom says. But unlike leukemia, they are nothing this family can't live with.

Molly was just 2 when a neighbor kid let her tag along at a dance class taught by PHAMALy choreographer Debbie Stark.

"In walks this precious girl wearing a mask that covered her entire face," said Stark. "She came in the door and announced, 'I'm here today.' I fell in love right then and there. That became the motto for her whole life: 'I'm here today."'

Because Molly was susceptible to infection,

The entire Nash family sits together in the family living room. They are, from left: Adam, Lisa, Delaine, Jack and Molly. (Post / Helen H. Richardson)

she could not take classes with other kids. So Stark would lock up her studio, and the two would dance there together for hours. Four years later, Stark became Adam's godmother. She still takes Molly to see theater all over town. Molly especially loves the Country Dinner Playhouse, where she saw "Grease" six times and developed a crush on a boy "who turned out to be a poophead."

Ever since Molly was born, she says, "My dream was to do a show with Debbie." And so with "The Wiz," "now I got my dream come true." The night before, the company had a 12-hour rehearsal that ended at 11 p.m. Everyone was exhausted - but not Molly. She said to Stark, "Do we really have to leave now?"

The theater community hosted a benefit in 2000 called "A Moment for Molly," where she was presented a silver-balled necklace that belonged to 'N Sync's Chris Kirkpatrick. Months before, "Buzz" Reifman, Denver's "doctor to the stars," arranged for Molly to meet her idols backstage at a concert.

Kirkpatrick sent a recorded message to Molly's benefit. When he said, "I have a little present for you," Reifman produced the necklace Molly had so admired. She's since been offered $10,000 for it, but Molly's not selling it - "not ever."

Molly's prognosis is unclear, because there are only about 300 people in the world with Fanconi. What her parents do know is that she is extremely susceptible to several cancers.

They also know that Molly's transfusion bought them time. Time for her to meet her brother and sister. To develop mad crushes on boys and a passion for dance. To find a cure for cancer. Time to soon become a teenager, something that seemed impossible at birth, when doctors predicted she would die by 7. 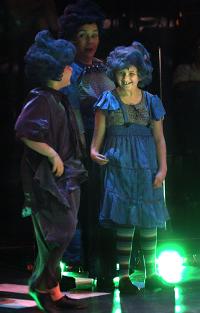 "Yes, it stinks that Molly was born with a disease, but I don't think of it as a punishment because God gave me my Molly - for good and for bad, and for her challenges. And I wouldn't have switched her for any other baby."

"Thank you momma," Molly says before giggling like a blue-haired munchkin.