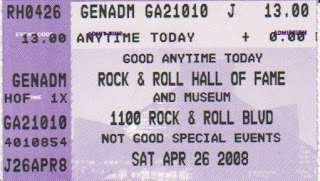 As always, I was thinking of you and remembering my past visits to Cleveland. I thought about the last two times I was there. One was on my way back from dropping the cells off with Dr. Hughes in Detroit. I had driven from New York City through a hurricane to get the biopsied cells to his lab for analysis. I then turned right back and headed towards Mom in New York, only stopping for about 4-5 hours sleep in a hotel off the highway near Cleveland. And the last time was on my way back from Minnesota after your transplant. You, Jack and Mom flew on the Honeywell corporate jet home, and I drove our green Isuzu Rodeo, with our stuff piled up inside, back to DC. My first stop was in Madison, Wisconsin and my last stop was in Cleveland, where I had dinner and stayed overnight with Karen and Chip and their brood.

Karen is still in China. Mom got an email from her yesterday. Mom remembered the trips we made to Cleveland for Karen's wedding and Jane's wedding. What we didn't talk about was the stop we made there on the way to Minneapolis. Strangely, when I got online today I got an email alert (I'll explain those later) that gave me this link...

Google must have just indexed the New York Times archives from 2001 or something. It was a weird coincidence. Mom's description of "what felt like the longest walk around any block ever," really brought me back. I always think that if I ever have to remind myself that I have the courage to do anything, I will think back to when I removed your respirator so you could die. Mom has done some incredibly brave things and that walk is one of the bravest.

This trip had no great drama, but it was great all the same.

We went to Jacobs Field, where Mom and I went to a game the weekend of Karen and Chip's wedding, and watched a decent slugfest that the Indians ended up winning 6 to 4. Joe was just a tiny bit disappointed. Oh, and the park is called Progressive Field now.

I always find it a bit painful going to a ballgame during Passover. No hotdogs or beer. I actually had a kosher hotdog without a bun. That stunk. After the game they had a terrific fireworks which we all enjoyed. 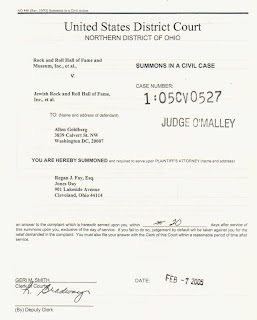 I told you a few years back how the Rock and Roll Hall of Fame sued Jeffrey, David and me for trademark infringement. That was all pretty silly and definitely not "rock and roll." We changed the name of the organization and the website to Jewsrock.org. I had never been to the Rock and Roll Hall of Fame even though I love rock, had been sued by them and once donated something from XM to the place for display. So I guess it was time.

They had a lot of great exhibits and movies. I know that Jack really enjoyed himself. Joe, not so much. But he was a champ and hung in there. We were there for close to 5 hours and we could have used an additional day.

After the Rock Hall we headed to Jane's family's home in the hills of northeastern Ohio. The property is called The Knob. You were there once with Jack and us, and you had a blast. You played the homemade "Toss Across" game they have. You threw bean bags through holes in the wood board.

I showed it to Joe and of course he starts whipping the beanies like they were baseballs. I think he was showing off for Crile, Jane's oldest daughter. I told him that a good method was the underhand toss. Nothing doing.

I guess I've been to the Knob twice before. Once was with you and the other was for Jane and Brian's wedding. I remember that you and Joe hung out at Karen's mom's house during the wedding. The property has been in Jane's family forever. The road that we got on when we exited the highway was called "Crile Road." Crile is Jane's grandmother's family name.

In the bathroom on the first floor of the house there is a photo of Lou Gehrig. There is an inscription from Lou's wife Eleanor to Jane's grandfather. She says that of all of the people who cared for her husband, Lou loved Jane's grandfather the most. He was a doctor - but also an athlete - big and strong like Lou. It truly is an amazing personal tribute and piece of history. It is a cliche, but they don't make heroes like Lou Gehrig anymore. He was an amazing baseball player who just let his performance on the field do the talking. His "quiet" greatness would make a good role model for Joe.

Jane and her whole family (for generations) are just so interesting and impressive. When we were there, Jane showed us a book that her mom and dad just wrote. It says that to live a long and healthy life you shouldn't eat anything with a mom or a face. Yuck. That means no meat or dairy. People who eat like that are called "vegans." Since I can't eat dairy and Mom doesn't eat meat, it makes a lot of sense for us. We're going to try it. We'll see how long we can stick to it. Don't worry. Your brothers still get to eat whatever they want.

Jane is always a delight to be around. She is full of life. Her kids are great too, and it was nice to get to know them. Jack really enjoyed hiking through the woods and learning stuff from Jane. She used to be an Outward Bound instructor and knows so much about the outdoors. Unfortunately, Brian was busy and wasn't able to be there with us over the weekend.

We finally headed out on Sunday morning after some rock climbing and zip lining. On the trip back Mom and I spent some time listening to a book on my iPod called Love Is a Mix Tape by a guy named Rob Sheffield. It is about Rob's wife Renee, who died suddenly of a pulmonary embolism. When I first put it on I was worried Mom was going to say, "not another thing associated with your fixation on death and dying." But she didn't. She actually really liked it. The way Rob describes his love for Renee and their life together, and his sadness at her dying is wonderful. It made me think of you and it made me think of Mom.

Listening to a book really makes the trip easier. We did run into traffic right outside of Hagerstown, Maryland. The cars on the highway just stopped. We listened to the radio and learned that there was an accident on the other side of the road. We figured that it must have been pretty bad considering all of the emergency vehicles that were on the scene. Mom was just praying that the guys wouldn't have to see anything terrible. They cleared it all before we got to the scene.

While we were stopped, I noticed a car next to us that said, "In Memory of Ashley Maria Bellosi 1984-2007" on the back window. The windows were all tinted really dark. You couldn't see the people inside. I was wondering if Ashley's parents were inside.

I think the whole phenomenon of putting that kind of thing on your car, which is totally new, is interesting. I wouldn't do it (though your initials HSG make up the license plate on the Vespa), but it does allow people to honor their loved ones in a way they want - very public. I looked up Ashley Maria Bellosi when I got home and what I learned was so sad and tragic. Ashley was a beautiful young woman in Baltimore who last year was beaten to death by her boyfriend.

Long illnesses, sudden or violent... it all stinks.

Email ThisBlogThis!Share to TwitterShare to FacebookShare to Pinterest
Labels: jewsrock.org, Rock and Roll Hall of Fame