Mom and I were planning to go to your friend Molly's Bat Mitzvah tomorrow. But the more Mom thought about it, she realized just how hard it would be. Yesterday, I had to make a decision. Would I stay home with Mom and your brothers, or head to Denver to see Molly become Bat Mitzvah. My first responsibility it to take care of Mom, Jack and Joe, but I also felt strongly it was important to go be with Molly and her family.

I am now on an airplane looking out at the clouds. Being up in the clouds is totally different since you died. When you are little — at least it was for me — you think that heaven is up here in the clouds. Whenever you see a cartoon, or TV show or commercial and they show heaven, the people or angels are hanging out on clouds. So this is where dead people go.

Even though I'm all grown up now and I know that out this window is just frozen water vapor, I am crying.

Mom asked me how I made up my mind to go. I told her that I wanted to honor Molly and Jack and Lisa and the rest of their family for all that they've been through. It has been such a hard road — perhaps only they and we can really understood just how difficult it really was — and they have made it. Molly is here. She made it.

I also told Mom that I often think about how sweet and amazing it was that they all came to Washington for your funeral. That was an emotionally and physically superhuman thing for them to have done at that time.

And the last reason is maybe a bit more selfish.

Mom and I grieve you in different ways. It is tough to describe Mom's grieving because it is so personal. But the best way to describe it for me is that I charge head first into things that might make me think of you. Sad and/or are hard to do is what I crave. Because for me, the sadder I am… the closer I feel to you.

I have this need to be close to you, and it is getting harder as the years go by.

On the bus on my way to work yesterday I was reading a story Jeffrey wrote about this guy John McCain, who is running for president. Here is part of what he wrote,
"After John McCain was released, in 1973, he learned that on several Christmases during his captivity, his father had traveled to the northernmost reaches of American-held territory, to be as close to him as physically possible."
For this weekend, at least, the place for me to be is Denver.

Yesterday I was scanning some stuff to put on here and on the new blog I started for Joe. The first thing I scanned was this rainbow that Joe's drew at school the other day for me and Mom. 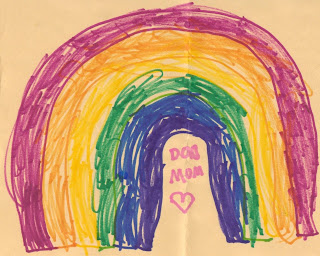 Next in line was Molly's invite. 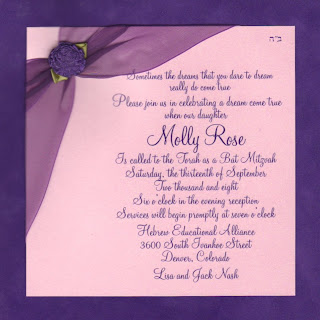 When I picked it up to place it on the scanner I saw that she and her parents included words from the song Over the Rainbow.
"Sometimes the dreams that you dare to dream really do come true."
You know how I am a sucker for coincidences. That sealed the deal.
So here I am. Over the rainbow. In heaven. With you.

Email ThisBlogThis!Share to TwitterShare to FacebookShare to Pinterest
Labels: Molly