Tonight was a great night.
Joe is playing on two baseball teams this fall - and a football team. He is playing for the Cap Cities Little League Pirates, the same team he's been on for 2 or 3 years now, and we also signed him up for Northwest Little League.
I was so psyched when I got an email from Joe's coach today introducing himself and instructing the parents to pick up the uniforms at his house, which isn't far from here.
I was psyched because the Northwest Little League team is the Yankees, Joe's favorite Major League team. He already has so many Yankee shirts and posters and stuff that wearing the uniform would be the cheese on top of spaghetti. Normally you say the icing on the cake or the cherry on top of a sundae, but Joe's favorite food for the past few months has been spaghetti with cheese on top. He eats it for dinner almost every single night now. Actually, he hardly eats any of the spaghetti; he just piles cheese on the top and eats that off. When I try to mix it all in he gets mad at me. That brother of yours is a little nutty at times. Oh yeah, I forgot one other thing. He calls the cheese "sugar."
So when I got home from work I told Joe that we had to go on a quick mission. I wasn't telling him where we were going but explained he wouldn't be disappointed.
Little did I know that he had already picked this night as the night he would finally learn to ride a bike. I asked him to give me just five minutes for the surprise and then I'd deliver him back home to Mom for the inaugural bike ride.
When we got to the coach's house I told Joe we were just going to the door to pick up something and then head back home. After years of being too scared to ride, Joe - this afternoon - decided enough was enough and was going to get it over with. I didn't want him to lose the courage he had worked so hard to build up. Actually, what might have pushed him over the edge was your 4 year-old cousin Noah, who just learned to ride. 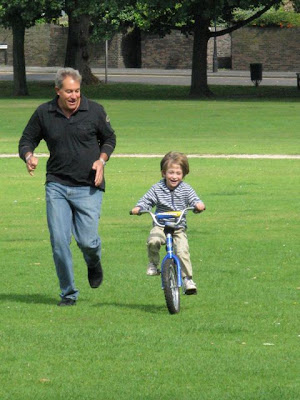 Uncle Andy sent us a picture of Noah outside of their new house in London. I showed it to Joe to spark that sense of competition (and maybe a little shame) that burns so fiercely inside him.
So when we rang the bell at the coach's house, I was surprised to see the door opened up by an old friend of mine. It was Monica, a woman I knew really well 20 years ago. We were part of a big group of friends who lived right around here who went out all the time to parties and stuff like that.
I hadn't seen her in years. More than 6 years it turned out because when Joe and I walked in (the coach, Monica's husband, hadn't gotten home yet with the uniforms so the "quick stop" was out of the question) Monica asked me how my other son, the one who was sick, was doing. I told her very matter of factly - which means I didn't cry and my face didn't scrunch up - that you had died. She was very sorry.
Steve, her husband and Joe's coach, walked in a few minutes later after we got a chance to meet their kids who are really great. Joe was able to pick a number he wanted and we grabbed a hat and headed home.
The second we got back Mom and Joe went straight over to Stoddert with your old Pokemon bike. Your first two-wheeler. Joe got on, Mom pushed, and he was off. Being almost 7 years old and pretty athletic helps when you are learning to ride a bike. It didn't seem as much learning as just finally doing. 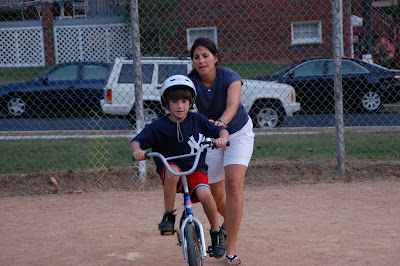 Joe rode and rode around the bases - of course - like a champ. Then some other neighborhood kids came over and rode on the field with him. In true Joe fashion, he didn't want to stop riding.
I can't wait to get to St. Michaels so we can all ride to town. I only wish Joe had gotten the courage up to do this a month earlier so he could have rode a bike with everyone else at the beach.
I guess really knowing how to swim is next. He is so close.

Email ThisBlogThis!Share to TwitterShare to FacebookShare to Pinterest
Labels: Yankees