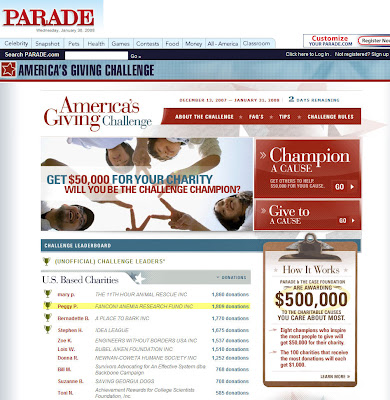 Parade Magazine, which we were in one time and which you get in the Sunday newspaper, is having a contest. They are giving away $50,000 to 8 different charities. The winners will be the charities who get the most people to donate money to them.

The Fanconi families are doing a great job getting all of their friends to donate. More than 1,400 people have done it so far. I sent out an email to everyone I know asking them to give to FA research. I think we're in second place right now, so hopefully we'll win.

It is a pretty smart contest because the charities will end up not just winning much-needed money, but they will also get a lot more people to know about them. I am proud of the FA families for working so hard for this. I wish I had done it for Hope for Henry, but I wouldn't feel comfortable competing with the Fanconi anemia Research Fund for money. 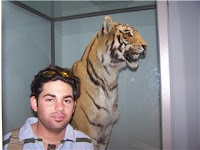 FA research is so important. I was looking today at the website of a young guy, Justin, who is 22 years old and has FA.

He was transplanted by Dr. Wagner and is fighting for his life right now. Here is what was on his website from today. I think it is his mom who is writing.

Transferred from BMT to PICU yesterday about 6:00pm. The dialysis machine we needed to use in his room was a no go as 2 renal nurses called in sick leaving them short staffed. We had to move him. He is on the gentler 24 hour dialysis here in the PICU. Only the PICU nurses know how to use this Prisma machine so move we must. As with everything, things moved slow. He didn't receive his central line til 9:00 ish and they couldn't place his art line in his right wrist at all.

Finally gave up and said they would place it in an artery in his groin to monitor stats if necessary during the procedure. We started dialysis at 10:40 and moved slowly for the first hour. He tolerated that well. At midnight, we were able to boost it to remove a little more fluid including that which he had going into his body from the iV pole, trying to move him ahead. Yesterday he did pee off everything that was put in that day, but we were still 3 days behind. We need to pull off roughly 4 liters of fluid. Things went smoothly and i guess I laid down between 1 and 2am. His heart rate alarm started, his rate dropped and soon after, Dr. Nelson came in and the arterial line needed to be placed. Sleep came for me between 2 and 3am.

Last amount I heard early this morning was that 1 liter had been pulled off. He's down to 60% oxygen, 22 breathes per min, peep of 12. So a ways to go. Heart rate in the 90's, blood pressure reared its' ugly head earlier, med given and it fell nicely. As the renal and ICU docs left last night they felt he was tolerating everything well. Have seen no "teams" yet.

Prayers that they feel we are heading in the right direction. It is bitterly cold here. This room has a wonderful view of the Mississippi River...which is iCY. So Prayers for Restoration and healing in Jesus' Name.

It seems that praying for pee is pretty common. That's all I wanted you to do and it just didn't happen. Justin seems to be working hard to get the job done.

Lately, I have been buying a Powerball lottery ticket each week. You might think I won the lottery once already with you. There was less than a 1-in-a-million chance that you'd be born with Fanconi anemia.

Last week I changed strategy and instead of letting the machine pick the numbers, I marked my lottery ticket with a combination of numbers made up of the dates of your birthday, Jack's, Joe's and Mom's. Surprisingly, even with that iron-clad strategy for success, we didn't win.

There is always next week as they always say. I will let you know when we win. I haven't thought it through all the way, but this is what first comes to mind when I think of what we should do with our winnings.
Actually, earlier this week I bought shares in a minor league baseball player, Randy Newsom - one share for Jack and one for Joe. This is Randy's story:

Randy began his professional career after signing with the Boston Red Sox in June 2004 out of Tufts University. He was traded to the Cleveland Indians in July 2006. This trade was part of the deal that sent Coco Crisp (OF), Josh Bard (C) and David Riske (RHP) to the Bost Red Sox for Andy Marte (3B), Guillermo Mota (RHP) and Kelly Shoppach (C).

Since being traded to Cleveland, Randy has quickly proven his worth as a professional baseball player. His first year with Cleveland, Randy was the MVP of the Carolina League Championships Series.

In 2007, Randy had a dominating 1.50 ERA in Advanced A Kinston.
He was quickly promoted to AA and was selected to the Eastern League All-Star Game in July. For the season Randy went 4-1 with 18 saves and an outstanding 3.12 ERA as a closer for the Southern Division Champion Akron Aeros.

So Jack and Joe now own part of Randy's future earnings. Hopefully, he'll sign a A-Rod-sized contract one day. He is a submarine style pitcher, and I don't see him being a premier ace throwing that way. I think the real fun will be in following his career.

But our lives have taught us that you never know, you just never know. Right?